The Iwatobi Swim Club is dead. Torn across two different continents, and the group disbanded, the pool has closed indefinitely.

The fourth and final member of the original relay, he returns from studying in Australia and joins their rival team. And he’s definitely not going to make it easy for Haru.

Sports anime is a subgenre that has covered almost every athletic activity since its proper introduction in 1983, with soccer anime Captain Tsubasa being the first success.  But before Free!, the waters were largely untested when it came to swimming. Despite a few manga series and live action films, the only swimming anime that existed was Kenkou Zenrakei Suieibu Umishou. This didn’t achieve the same popularity, ranking #1587 on MAL, in comparison to Free!, which is #125*.

But Free! had cemented its position as The Swimming Anime from day one.

When Kyoto Animation first released promotional material, the project was shrouded in mystery. It quickly became known online as ‘that swimming anime’ because no other information was available. So when the anime was finally released, the hype surrounding it was already massive. And it may just be deserved. 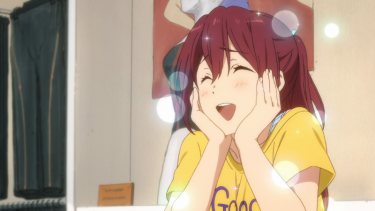 The generation who grew up with anime after the surge in popularity in the 90s, leading to the concept of ‘Cool Japan’ in the early 2000s, make up the majority of Western anime viewers today. While younger people who had just missed the decade are now being introduced to the medium through shows like Sword Art Online and Attack on Titan, most of the audience falls within the late teens/early twenties demographic. So for people from places such as the United States and Europe, the plot of Free! is particularly poignant. Covering topics such as growing up and growing apart, a lot of things that are happening in the series are happening for the viewers themselves.   The biggest thing that’s talked about is deciding on career paths after high school. This is covered extensively in season 2, Eternal Summer, where it’s even found in the ending credits. While anime is often used for escapism, when it hits such a personal note to so many people watching, it definitely feels more engaging – like it’s directly appealing to the audience to empathise with Haru and the boys. Having common experiences with the characters makes it so much easier to feel connected to them, so the series translates well to the Western demographic.

It’s also a story that is universally familiar, so people can relate regardless of where they come from. Anyone who has gone through late childhood can easily recognise the emotions involved in leaving school, figuring out what to do after and adjusting to changes in friendships along the way. Without revealing too much of the story, in one case, the series covers what it’s like to have to give up on your dream. This was an especially sentimental part of the plot that gives the series a lot more depth. In many sports anime, it feels as though nothing can go wrong and that everything will turn out right in the end, but by seeing at least one character fail to overcome the hurdles ahead of him, it feels much more realistic.

But it’s not just the story development that works well; so does the character development. 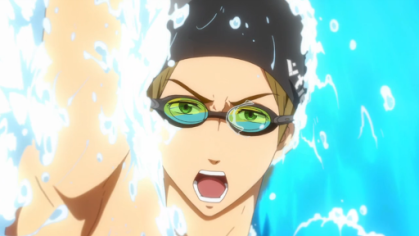 In a series which relies heavily on the idea of teamwork, it’s essential that the relationships between the team members are believable. Thankfully, Free! manages to do this. While it could be argued that originally too much emphasis was put on ‘the original four’, essentially leaving out Rei, this was corrected later on, giving him the opportunity to rightfully complain about feeling excluded from the group. Also, by focusing on Haru, Rin, Makoto, and Nagisa at the start, it builds up the groundwork for the rest of the series and lets the audience really understand how far back their relationship goes.  And repeating the montage of Makoto making sure Haru’s ready for school secures his place as the mature role model of the group, as is expected of the swim team captain. 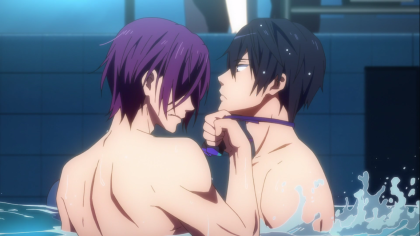 Each person has their own problems, and no two character arcs are the same. Even though Rei’s story parallels Rin’s in places, with both of them trying to overcome self-esteem issues, these issues were born from different situations so they are handled differently. The same could be said with both Makoto and Haru trying to decide on their future careers. Rin’s storyline was possibly the most engaging, as watching him repeatedly try to rebuild his confidence and make a place for himself in the swimming world contradicted a rather negative first impression.

Overall, Free! is a relatively light-hearted anime with a serious underside that shows itself at exactly the right time, balancing comedic antics with realistic drama.