The start of this week was spent researching how to put futon sheets on properly and scouring the internet for Fukuoka’s waste disposal rules. Thrilling, I know, but if I’m going to be staying here for the next few weeks, I need to start with the basics.

These are the kind of small things that no-one really thinks to include in travel plans. Either the stay is too short for it to matter or the country isn’t exactly strict on how things are meant to be done. Japan, however, has a reputation of keeping to rules and regulations – and I was definitely not going to be the one to deliberately step out of line.

I think that’s where I realised the line between visiting as a tourist and living as a student. I may only be here for a month but that’s still over twice as long as the average holiday and as I learnt from moving to two different universities, enough time to settle.

Not that I’m planning on completely settling into Fukuoka seeing as I have to leave so soon, but I want to experience as much as I can while I’m here.

And my first full week started brilliantly. After taking the subway from Nishijin to Akasaka to meet everyone else, then going back on the Kuko line to Meinohama-eki (駅eki, Japanese for station) we got the bus to go to the ferry terminal. We then sailed from Meinohama to Nokonoshima, an island with a beautiful nature park. When we got there we had a picnic with karaage (fried chicken) and sweet potato tempura from the shop by the entrance.

Most months, Nokonoshima Island Park has a different kind of flower blooming. Around September to November, it’s the cosmos. In Hanakotoba, the Japanese language of flowers, the cosmos means ‘maiden heart’ and the kanji is 秋桜, using the characters for ‘autumn’ and ‘sakura’.

I may have been extremely shy but I tried my hardest to make conversation. I’m not always the most verbal of people in my native language, so attempting to talk in both English and Japanese to people I hadn’t met before was daunting to say the least. But I don’t think I did too badly.

The views were absolutely stunning from the island, and the flowers just made it more so.

The view from the Island Park

The morning of Day 5, I woke up feeling very nervous about my first day of classes. I knew I’d have to take a placement test to gauge my Japanese proficiency, but after self-studying I really didn’t know what to expect. Although I didn’t need to worry, because even though all the questions were in Japanese and I didn’t understand a lot of it, I did my best (and that’s all that matters, right?).

After two hours of private tuition, I decided to look around Akasaka for a while, searching for the anime store my sensei had mentioned to me. Luckily, I found it, and had to drag myself away from the Neon Genesis Evangelion figures because there’s absolutely no way they’d fit in my suitcase.

Plus, I was running out of food, so I went to Don Quijote to stock up.

My second day of classes went pretty well, with my teachers praising me for using kanji in my homework when they weren’t expecting it. But although I can read hiragana and katakana, I’d be translating them in real time during conversation practice so when I speak out loud, my reading speed slows down drastically. One thing that I’m having to learn right now is that it’s not bad to sound stupid. I’m here to learn and mistakes are bound to happen. Although, being seen as unintelligent is one of my pet hates, so it’s not going to be a lesson that comes easily.

Anyone who knew me while I was growing up will know that, for all intents and purposes, I was a shy kid. And anyone who knows me as an adult will know that it’s very hard for me to resist a good Starbucks. In a foreign country with a language that I can’t fully express myself in, those two sides of me definitely didn’t agree with each other. I was legally an adult before I could properly order food by myself and over the first few days in Japan my confidence had taken a few steps back. I’d been avoiding food and drink that I couldn’t get from a shop and sticking mainly to the stuff I had in my fridge. But on Day 6, the temptation of a chai latte forced me to reconsider.

So I took a breath, and with a “Chaitiirate onegai shimasu” I’d made my order (I still can’t get my hands on a pumpkin spice latte in this country, though).

I decided to repeat my experiment in McDonalds the next day, spontaneously hopping from the station to the restaurant as soon as I’d got off the train. After all, I haven’t had one in ages and it had been a week since I’d left home so I figured I could treat myself. My mission was a success and I emerged victorious with a tray of deep fried goodness, feeling very pleased with myself.

Day 7 was also the day my accommodation switched from summer futons to winter futons. My bed is Western-style but instead of wooden slats and a mattress, it’s tatami (a traditional Japanese mat made of rice straw) and futon blankets. The whole thing seemed slightly early to me, because even though it’s mid-October, the temperature outside is a mild 20-25 degrees. However, this must feel like it’s getting cold for the population of Kyushu, and because we’re still in the Northern Hemisphere the sun sets between 5 and 6pm.

After class on Friday, one of my teachers invited me to dinner at an izakaya, which is the closest approximation to a Japanese pub. Although, I had a two hour gap between my lesson and the meal and I didn’t fancy going back to my dorm for just over an hour. So jumped on the subway and headed to Ohori Kouen, a beautiful park dominated by a vast lake. Ohori is probably the best known of Fukuoka’s parks and I’d been looking forward to going. It made sense that I should take advantage of the good weather. Because I only had an hour to spare, I didn’t have time to check out Fukuoka Castle which is located on the east side of the park, but I’ll definitely be back to visit in the next few weeks.

I’d been a tiny bit apprehensive about going out to eat, because there’s so much Japanese food I haven’t tried yet. The last thing I wanted was to offend anyone by disliking something, and even though I know deep down that’s irrational, it still concerned me. I also know that refusing to try is more offensive, so despite my inhibitions I tasted lots of things I’d never eaten before, like sashimi, wagyu beef and chestnut flavoured ice cream (Extra points for using the phrase “Kono sakana wa nan desu ka?”, or “What kind of fish is this?”). 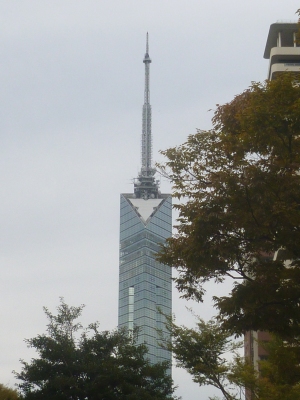 Saturday morning, I had a much needed lie-in. The last week had been pretty intense, and while I am getting used to it, life in a different country requires a lot of extra energy. But I didn’t want to waste the entire day, so after lunchtime I went to the Momochi Beach area, which is approximately a 20 minute walk from my room. I haven’t had much time to be a typical tourist so far, and I wanted to take photos around Fukuoka Tower, so I figured that the weekend would be the perfect time. And like last week, I must be the queen of accidentally stumbling upon festivals, because the local radio station was holding a matsuri at the base of the Tower. Surprisingly the beach wasn’t crowded, but I’m waiting for a weekday to properly enjoy the ocean, which will probably be the same day I actually go up Fukuoka Tower (I’ve been advised that it’s busy at the weekend).

A quick pit stop at the dorm to drop off my groceries later and I’m out the door again, this time heading to a house party to view the fireworks. The fireworks, or hanabi in Japanese (花火, written with the characters for ‘flower’ and ‘fire’), were supposed to be held before I’d arrived but because the weather was so bad they were postponed until now. Everyone was sat out on a rooftop terrace, with several plates of food ranging from yakisoba to takoyaki.

It was a far cry from the firework celebrations I’m used to, where they’re reserved for cold November evenings reminiscing about how one guy nearly blew up Parliament hundreds of years ago. It was probably closer to a Fourth of July party, barbeque included, although as a Brit I wouldn’t know for sure.

The food was good, and the fireworks were pretty, but that was definitely a night I wouldn’t have experienced if I hadn’t challenged myself to come here. Earlier in the week, I was watching things on YouTube: my alternative to Crunchyroll seeing as it doesn’t work in Japan. I came across a video from creator Dodie Clark, who I’ve been subscribed to for a while now, and she was talking about jumping out of a plane. Initially she hadn’t thought she could do it, but in overriding all the fear and insecurity, she did something she never knew she was capable of. My situation is definitely not as dangerous as falling several thousand feet, but I can certainly relate to that feeling of terror. Even though I was so freaking scared before I started this journey, I’ve pushed through and handled everything that’s been thrown at me for over a week.

Now here’s to another three.

3 thoughts on “IgirisuJen: From hana to hanabi.”