One year to change your life, all expenses paid… sounds good, right? For Kaizaki Arata, a part-time conbini worker, it seemed too good to be true. Approached in the middle of the night by an employee of the ReLife organisation, he’s promised a full time job if he agrees to take part in a social experiment for a year. Drunk and desperate, Arata takes the pill he’s offered, which makes him look ten years younger. It’s his job to infiltrate the local high school and act as a normal student, but it’s not exactly easy. His body is still physically 27 years old, and he hasn’t sat in a classroom for years. Add a smoking habit and a dash of alcohol dependency… well, he’s not exactly the star pupil. 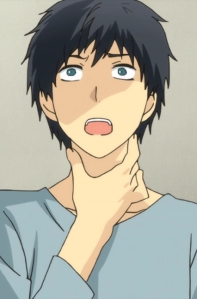 For such a light high school anime, ReLife touches on some very serious topics. Arata clearly has some undiagnosed mental health issues which have had a large impact on his life. It’s implied that he has some sort of anxiety or post-traumatic stress disorder, which at one point stopped him from even putting on a necktie without having a panic attack. If having a poor employment history wasn’t bad enough, freezing up in the middle of a job interview was the nail in the coffin. His anxiety issues stem from his time at a burakku kigyo (or black company), when his senpai committed suicide in the office. The other employees were indifferent towards her death, which prompted Arata to resign -despite only working there for three months.  He blames himself, thinking she wouldn’t have died if he hadn’t stood up to her tormentors, who were bullying her because she was a woman in a male-dominated workplace. Office sexism is a big topic in ReLife, condemning the men who’d pushed Arata’s senpai to suicide. However, it does still suggest that staying out of other people’s business is the right course of action.

Another main theme of this series is the concept of age differences and how that affects relationships. With Arata still being 27 and only looking 17, that brings up a whole load of issues that would’ve been avoided if this was a straight time-travel anime. Although, that being said, there’s still a moral dilemma in series like Boku Dake ga Inai Machi, because Satoru still has the mentality of an adult. It all depends on where the line is drawn. Arata often feels uncomfortable getting so close with high school kids because he’s an adult in their space, and this is especially true when girls are involved. He feels guilty for having feelings for Chizuru, and even though it’s revealed later that it’s nothing to worry about, it still feels slightly unsettling for the audience. In Japan, the age of consent is 13, but youth protection laws prohibit adults having relationships with children under 17. It’s the last year of high school with students aged between 17 and 18, so it’s just about legal… but the decade age gap is still a bit too long for my liking.

The characters are mainly stereotypes, with Kariu as the hot tempered tsundere (it’s not like she likes Oga or anything), Oga as the good looking prince type who’s both popular and smart and Chizuru as the stoic dandere who gradually shows she cares in her own way. They’re generally more interesting than Arata, and thankfully the anime gives them their own time to shine. I particularly enjoyed Kariu’s storyline and her resentment towards her rivals because it was a real glimpse into her insecurities and doubts. I’d had my doubts about Yoake Ryou, thinking that he may have had ulterior motives. That was kept up for a relatively long time, because the pacing of the series is done well. They didn’t tell us everything about last year’s failed experiment until the last moment. They didn’t tell us about the identities of some of the students until they absolutely had to. And we still don’t know everything about the ReLife programme.

The finale’s open ended, which could suggest that another season will be released at some point, and given that the manga is still ongoing, it’s very likely that it will. If that’s the case, I’d like to see new test subjects joining the programme, coming from different backgrounds and having different reasons for not having a job. ReLife is a good premise for a story, and is the perfect platform to talk about very human issues.

The art style looks a little bit plain, but the original manga is even more so. While watching the anime, I didn’t feel like the art was particularly outstanding, but after checking out the source material, it’s actually an improvement. However, that didn’t stop the plot compensating for the fact that it’s not the best-looking series out there.

Like I said in my first impression post, I hadn’t had very high hopes for ReLife in the beginning. Before I’d watched it, I thought it was just another generic anime and to some extent it is. But I still found it oddly compelling. I could kind of guess where the plot was going, but there was still some uncertainty that kept me watching. I found myself thinking, “I kinda wanna watch ReLife tonight” a few times. And even if Arata is your average protagonist with some extra baggage, I still secretly rooted for him to turn his life around.