Kumiko Oumae has just begun her new life as high school student. Determined to make a fresh start,  she decided to attend Kitauji High, breaking away from her old friends and her old self. Despite being part of a school band for the last few years, she’s initially reluctant to join the Kitauji Concert Band, concerned that it would conflict with her new image. But after her new friends convince her, she picks up the euphonium once more, and realises that some things just can’t be left behind.

Kumiko and her euphonium

Despite not featuring a sport, this series shares a lot of common themes with the sports anime subgenre. Given that the main plotline revolves around training for a competition, the same issues and obstacles that are found in an athletic club also affect the more artistic extra-curriculars. The line between sport and art can be surprisingly fine, and it’s definitely very thin here. There’s really no difference between a band and a team in the bigger picture, and every club has its drama and in-fighting. Concepts such as rivalry, self-esteem, and co-operation between members are all typical sports anime topics and they’re certainly covered in Hibike!. They have rival schools, both Kumiko and Reina wanting to feel special, and the second years not working as a team with the third years because of a year-old resentment. These are just a few examples, with common tropes recurring across the whole season.

Spotting these tropes was made so much easier by watching Hibike! Euphonium directly after another KyoAni series, Free! Iwatobi Swim Club. And if Free! was made for girls interested in seeing half-naked men in Speedos, then Hibike! is definitely more enjoyable for girls who show more interest in women. Avoiding fanservice and focusing more on the female half of the cast, it not only treats its girls with more respect, but also gives us some yuri pairings with some very strong potential. Even though it isn’t an official yuri, it is very hard to deny the chemistry between some of the characters. The relationship between Kumiko and Reina starts off as slow-burn subtext, gradually building up from undertones to overtones. While there are definitely no promises for any endgame confirmation that they’re together, what we do have clearly shows that they love each other.

The only evidence to the contrary is episode ten. In an almost maddening U-turn, Reina reveals that she likes someone else, completely contradicting earlier scenes. If you ignore that one small part of the episode, the character development between Kumiko and Reina is completely understandable, with Kumiko trying to atone for past mistakes and Reina slowly learning to like her again. All signs point to them becoming closer, without interference from love triangles. Kumiko tries to deliberately avoid a love triangle, just to be thrust into another one, and it just makes no sense within the narrative as a whole. It would be more logical to say that Reina feels admiration rather than any romantic emotions but it’s unclear whether that will be developed in the next season. There’s always the wishful thinking that it’ll be left behind in season one, but even after more KumiRei scenes, it’s doubtful.

Regardless of slight hiccup in the relationship dynamics and the potential queerbaiting, Hibike! Euphonium is an extremely strong series. 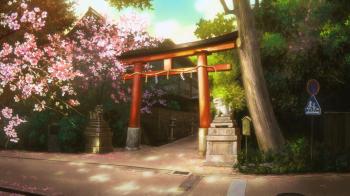 Proof that background art makes all the difference

The visuals are stunning; with the background artwork showing Kyoto Animation’s full potential.  Pairing this with their trademark art-style makes the whole anime breathtakingly beautiful. A personal preference in choosing a new series is how it looks. If the aesthetic isn’t right then it’s a lot harder to become immersed in that world, because the artwork is too distracting. Hibike! will definitely set the standard much higher for future releases, because even though the likes of Free! and The Melancholy of Haruhi Suzumiya looked amazing at the time of their release, the studio is evolving. KyoAni’s steady improvement over the years promises great things for the future, and while its past portfolio has already cemented its position as one of Japan’s anime powerhouses, it continues to prove that they don’t compromise on animation quality. Even if some of their plotlines aren’t exactly stellar, at least it looks good.

And Hibike! Euphonium sounds good too.

The sheer amount of research that went into the musical aspect of the show is so obvious, hiding the fact that none of the production team had experience of the concert band world before planning the project (source). For complete orchestra novices who are watching Hibike! for the first time, it’s impossible to tell that the directors were once in the same position. To ensure that it was as accurate as possible, they consulted actual musicians to correct any mistakes, and it was definitely worth it. Even though the series does talk about a specialised subject, Hazuki Katou’s character is completely new to playing a musical instrument so as they teach her, the audience are learning too. 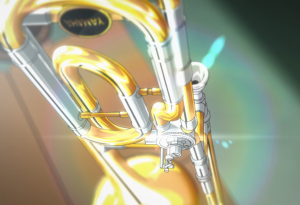 The soundtrack uses several pieces of classical music which reoccur throughout the series. While it may get a tiny bit repetitive at times, it perfectly captures the feeling of rehearsing things over and over again until it’s flawless. If you listen carefully, you can hear each piece sound more and more beautiful each time and it makes the connection with the characters even stronger because you’re actually listening to their journey instead of just watching it.

Even outside of the music played by the different bands, the background music is also classical-style, relying on piano and string instruments for a lot of the soundtrack. In reducing the use of electronic sounding audio, it ties all of the music together, without much of a contrast. It also fits well with the whole ‘feel’ of the show. As the anime is set in Uji, Kyoto, which is a more traditional city, and uses a more traditional style of music, it holds the whole series together and almost makes it seem timeless.

Overall, Hibike! Euphonium is a strong series, only a couple of lines of dialogue away from perfection.  The plot is a standard sports anime style narrative, which has been successfully tried and tested multiple times so it definitely works. However, using music instead of sport makes it seem more original, while still using KyoAni’s trademark art-style. Both the visuals and the music are stunning, with the attention to detail shining through. And the heavily implied yuri is just an added bonus.

What did you think? Would Kumiko or Taki-sensei be a better match for Reina?