Taking Puella Magi Madoka Magica at face value, it seems like a light, fluffy, pseudo-action anime following the lives of five young magical girls. But this macabre deconstruction of the mahou shoujo genre, all wrapped up in a pretty pastel bow, is so much more than meets the eye.

Madoka Kaname and Sayaka Miki unwittingly find themselves drawn into the fantastical world of magical girls and witch hunts, where a creature named Kyubey offers to grants them powers – all they have to do is make a wish.

The mahou shoujo (or magical girl) genre is one of the more escapist forms of anime. The protagonist is granted the power to become a protector, a saviour of worlds, and despite the hardships she will inevitably face, shoujo law dictates that everything will be okay in the end. The dead will be resurrected, memories will resurface and the force of love will fix all.

But Madoka Magica takes this trope and twists it beyond recognition. There is an element of futility in this series which sets a much darker tone, because if the cycle is just going to start again, why bother fighting in the first place?

There’s usually a stark contrast between the protagonist and the antagonist; an obvious dichotomy between good and evil.

But here, the line between the two is blurred. When a girl makes a contract with Kyubey, she effectively signs off her own soul in exchange for their wish. This often has unforeseen consequences, as mentioned in my MekakuCity Actors review. The type of wish they make has a profound effect on what powers they obtain, for example, Mami Tomoe wished that she wouldn’t die and remain ‘tied to life’, so her powers manifested themselves a magical ribbons. Their souls are also physically manifested as Soul Gems, which constantly require purification after confrontation with witches – their main adversaries. However, this also comes with a price and if a Soul Gem becomes too tainted with despair it has devastating effects.

It becomes clear across the series that there is no such thing as the pure untouchable heroine; that despair can creep into the heart of anyone, even a magical girl. They are still human, still vulnerable, still young girls facing the darkness head on.  What is dead is dead, and if a mahou shoujo is defeated in a witch’s labyrinth, she won’t be coming back. 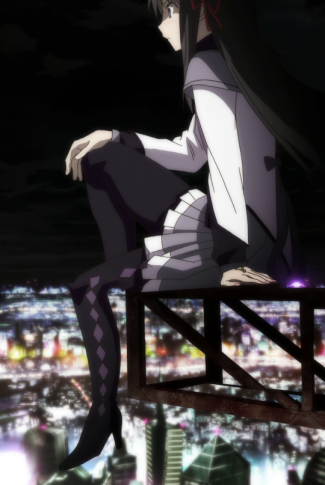 In the magical girl genre, the protagonist is made very explicit. She is the first girl shown on screen, the one who receives her powers in the first episode, and usually the titular character. In Madoka Magica, we instantly assume that Madoka Kaname is going to be that girl, but this series throws us a curveball. While it could still be argued that Madoka is the main character, this is very much Homura’s show. The first time we see Homura is in Madoka’s dream sequence in the beginning of the first episode, where Kyubey appears and says that Madoka must become a magical girl because Homura isn’t able to handle the witch by herself.  Later on, she turns up as a transfer student at their school and is instantly painted as the antagonist, warning Madoka against becoming a magical girl while Mami is doing her best to convince her to make her wish. It is only much later, when we see her motivations and backstory that we realise that she is more of an anti-hero. This series is so much more centered around her development than Madoka’s.

Puella Magic Madoka Magica has a lot of emphasis on emotions and how they can be both advantages and disadvantages. The relationships between the girls are very prominent and often border into yuri territory. There is a lot of subtext to suggest that there is something more to the relationship between Homura and Madoka, almost to the point where it becomes text, and to see this type of bond in a series which is not explicitly stated to be a yuri is refreshing.

The art style of this anime takes some getting used to. While a lot of it is a typically shoujo style, complete with pastels and large eyes, the style found in witches’ labyrinths are completely different. The contrast between the colours and styles can seem very unusual, it effectively unsettles the viewer enough to realise something is wrong. However, as the characters get used to the labyrinths so do the audience.

But this doesn’t mean that the sense of unease magically disappears. Madoka Magica simply shocks us in different ways, breaking tropes and introducing plot twists. For a 12-episode series, it contains enough interesting material for an anime twice its length.

An advantage of it being such a short series is that the tension is kept consistent throughout. Each backstory is explored, slowly revealing why the characters became magical girls and the motivations for their actions, and managing not to give too much information at once. The plot grows steadily darker as the audience learns more about the true nature of the mahou shoujo contract and what it actually involves.

Watch Madoka Magica they said. It’ll be fun they said.

Unlike most magical girl series, Madoka Magica shows our heroes broken down to the very core, their very beings deconstructed to a point of vulnerability we don’t usually see. As mentioned earlier, this genre has a high emphasis on the hope that everything will be okay, but these girls are stripped bare of this emotion. Seeing the characters in a more raw state than what is typically expected from mahou shoujo is rather unnerving. Despair is a very prominent theme across the series, and it almost feels like the series is being sucked into its very own labyrinth, succumbing to the darkness.